Tv has a new type of heroine: The Latina genius. Here’s why it matters. 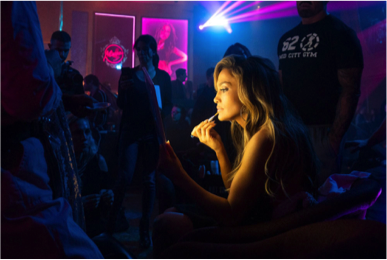 That Jennifer Lopez Snub Is Only the Beginning of the 2020 Oscars’ Latino Problem
“Both snubs have become two of the most widely discussed disses inside a distressingly white list of nominees. … But while the Lopez and Nyong’o snubs are symptoms of a broad diversity issue within the Oscars, they’re also part of a more specific problem: Latino exclusion and erasure. These performers deserved the kind of attention the Oscars rarely bestow on Latin American talent—but the amount of buzz both generated leading up to the nominations has made the oversight even more egregious. It’s already been a very weird awards season for Latino film fans, and at this rate it’s only bound to get weirder.”
https://www.vanityfair.com/hollywood/2020/01/2020-oscar-nominations-jennifer-lopez-latinos-snub 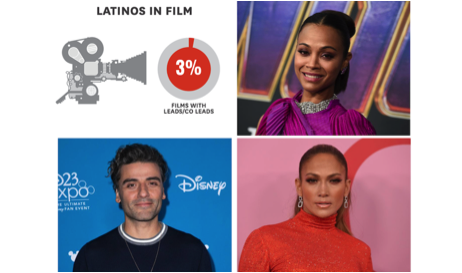 “It is well known that Latinos, in front and behind the camera, are severely underrepresented in Hollywood films. That’s nothing new. But how bad is it?
Latino actors barely landed 4.5% of more than 47,000 speaking roles in the 100 top-grossing U.S. movies from each of the past 12 years and only 3% were leads or co-leads. The staggeringly low numbers are just as bad behind the camera, where Latino directors constituted 4% and producers just 3%. That’s according to a just released study from the USC Annenberg Inclusion Initiative, which analyzed 1,200 films from 2007 to 2018.”
https://www.forbes.com/sites/veronicavillafane/2019/08/27/number-of-latinos-in-hollywood-films-is-dismal-what-needs-to-change/#58efe5c110c9 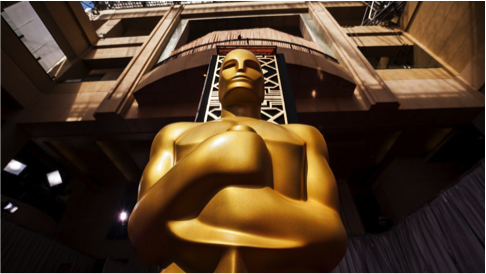 “Even before I glanced at the list of performers with nods this year, I knew who I wouldn’t find among the names: a Latina actress. Why? Because a Latina has never won an Oscar for Best Actress ― not once in nearly 90 years of Oscar history!
And Latinxs have fared only slightly better in other categories. Rita Moreno, in 1962, and Mercedes Ruehl, in 1992, have been the only Latina actresses to take home an Oscar in the Best Supporting Actress category. The sole Latino to take home an Oscar for Best Actor was José Ferrer in 1950. While Anthony Quinn, in 1952 and 1946, and Benicio del Toro, in 2000, are the only Latino actors to win for a supporting role.”
https://www.huffpost.com/entry/reminder-a-latina-actress-has-never-won-the-best-actress-oscar_n_58877e40e4b096b4a234af0e 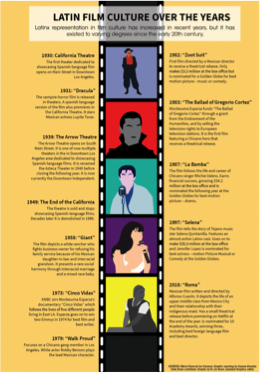 “Despite little modern representation, there is a long history of Latino representation within the industry, though it has not always been positive. In order to better understand the lack of modern Latino representation, the past must be taken into account to see where the industry is heading. From the downfall of the Spanish-language theaters that once populated Los Angeles to the rise of more diverse content from streaming services, the way the Latino population has been seen on the screen has evolved throughout the years.”
https://dailybruin.com/2019/06/08/latino-representation-in-film-remains-limited-despite-history-of-inclusion/ 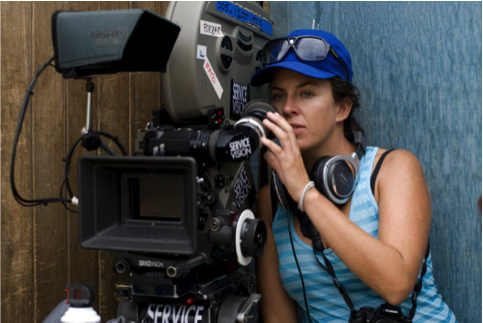 “Hailing from all over the Americas and offering a wide range of genres and styles, these 20 directors have earned Oscar nominations, won accolades from the most esteemed film festivals from all over the world, worked with some of the best actors around, and told stories as diverse as you can imagine — from documentaries on the legacy of the armed conflict in El Salvador to bisexual teen rom-coms set in Chile, and everything in between. Consider this but a mere sampling of the strong pool of Latina filmmakers working today.”
https://remezcla.com/lists/film/20-latina-directors-you-should-know/ 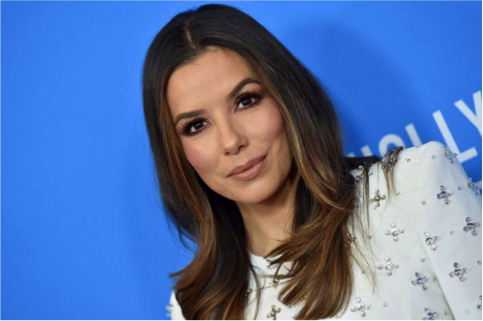 “It’s time to confront the way we see and treat Latinos in America. As we grapple with the enduring effects of a horrific attack on Latinos doing their Saturday shopping, a government that locks Latino children in cages, and leaders and news media outlets who spin vile, racist rhetoric, it is clear something must be done.
But it’s not just those in the political sphere who have a role to play in combating the false and damaging narratives about Latinos in our society. Even our biggest, most popular stories exported around the globe — Hollywood movies — often erase and fail to show humanizing portrayals of Latinos.”
https://time.com/5662739/latino-hollywood-representation/ 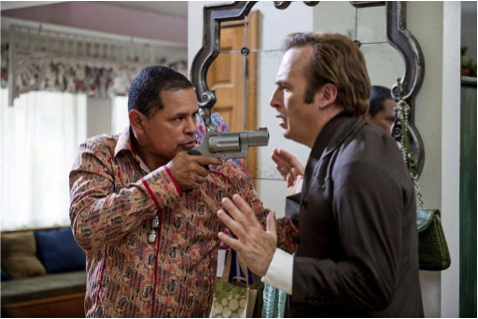 It would be nice to see Latinos living regular lives — not stereotype-fueled fantasies — onscreen.
“The quality of these dramas, speaking in purely artistic terms, varies widely: from the Emmy-winning TV series “Breaking Bad” and the not-so-celebrated 2013 comedy film “We’re the Millers” to this year’s widely panned “Peppermint” and Clint Eastwood’s largely well-received “The Mule.” But they repeat the same tropes: Latino gang members grimacing as they mad-dog confused white people; a secret meeting on a Mexican hacienda, with tequila served and Latinas in bikinis as poolside eye candy.
Meanwhile, in real life, Latinos are acting out their own human foibles, and trying to build their own private empires, in fields that don’t involve criminal activity. They manage your local Walmart, study law, get divorced, attend cosplay conventions, and do all sorts of things you rarely see them do in mainstream American television and film.”
https://www.nytimes.com/2019/01/05/opinion/sunday/latinos-cartels-trump-narcos-hollywood.html 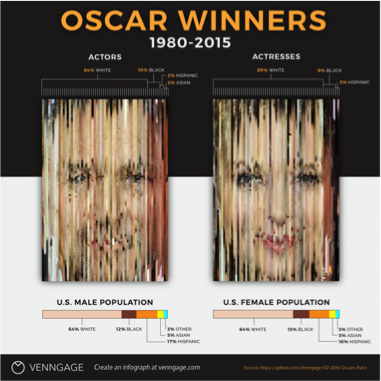 “Not surprisingly, when compared to the racial breakdown of the US population (census 2010), the number of white actors winning Oscars showed a disproportionate overrepresentation. Black actors were underrepresented, though not nearly so much so as hispanic actors. Hispanics make up around 16% of the US population but represented only 3% of Oscar winners.
The discrepancies were even more noticeable when we look at the percentages by gender. Women of color fared a lot worse than their male counterparts. White women ruled the Oscars, winning almost nine of out 10 times since the 1980s. Again, this isn’t surprising. When was the last time you saw a woman of color headlining a movie?”
https://venngage.com/blog/oscar-racism-interactive-infographic/ 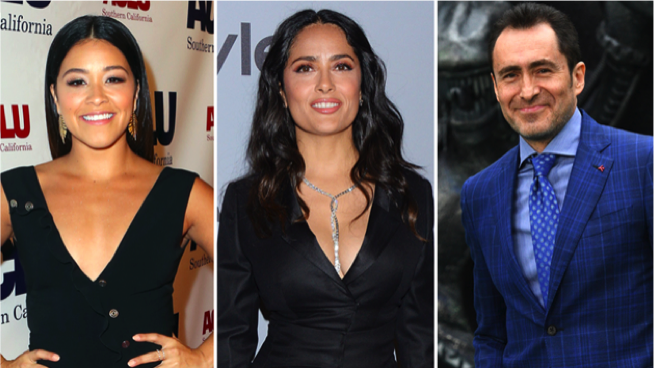 The absence of Latinos in leading film roles has created a feeling of invisibility among Latino artists in Hollywood. Just five actors with Latino backgrounds have won Oscars in the major acting categories over the Academy’s 90-year history: Rita Moreno, José Ferrer, Anthony Quinn, Mercedes Ruehl, and Benicio del Toro. The National Hispanic Media Coalition is planning a Feb. 5 protest to coincide with the Academy’s Oscar Nominees Luncheon.
https://variety.com/2018/film/news/latinos-academy-diversity-1202675254/ 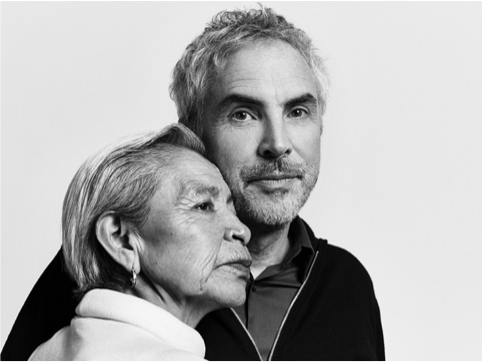 While there were some discussions with the major movie studios when it came time to sell “Roma” for distribution, Cuarón says he was fully aware that a foreign-language film shot in black and white was unlikely to find a typical Hollywood home.
“This is not the kind of film that the studios generally release. And I’m happy with that,” he says. “After more than a decade in which cinema has gentrified into some sort of product, suddenly we’re seeing a greater diversity going on. Remember the ’90s, in which the big studio movie was coexisting in the multiplex with the foreign film and the film from Sundance? That’s the healthiest way of cinema.”
https://variety.com/2018/film/news/roma-alfonso-cuaron-netflix-libo-rodriguez-1202988695/